In case you missed what is all this Digital Alchemy stuff about, here is an introduction of some extra motivations of the course.

From classes discussions, before each session's activity, we've created this cool zine

It is structured in 2 blocks:

You can see exlorations by some of the participants of cohort-0.

Fereshteh Toosi(they/them) an artist of Iranian and Azeri ancestry whose projects foster animistic connections through encounter, exchange, and sensory inquiry.Find them at their website: http://fereshteh.net

Rory Green (they/them) is a writer, editor and digital media artist living on unceded Gadigal land. Their work has been published in Australian Poetry Anthology, Cordite Poetry Review, Running Dog, The Lifted Brow, Rabbit and Scum Mag among others, and at events including BLEED festival and Freeplay Festival. Rory's ongoing newsletter, Otherwise Pokedex, aims to publish a poem for every Pokemon. Find them on Twitter @rorydoinstuff or at https://rory.green.

You can check course preview activity to see how would it look like the act of playing with the boundaries of creation. The process was:

I eventually enjoy making retrospectives. So would love to share some thoughts as a facilitator of this course.

As you might have observed, both demos are exposing the process of creation. And thought this is crutial in the course.

Let's think about some "common" interactions with computers, for example:

WHEN doing {ACTION} THEN {OUTPUT}

From simple interactions, we have expected results.

Let's think in defining a dual action for each action:

So WHEN doing {ACTION} THEN do {DUAL ACTION}

Our interaction with computers can be defined by combining: actions and dual actions, creating a procedural method which enables loops and depends on the actor (you) to define when to stop it and go back to Table 1 for expected results.

This WHEN | THEN paradigm is very well known in Celullar automaton theory, which I was introduced by Murilo Polese in the context of Color Code, a visual language he created.

And I started seeing that pattern not only for coding engines, but also on expanding usage of digital mediums.

My main motivation last cohort is described in the following image: 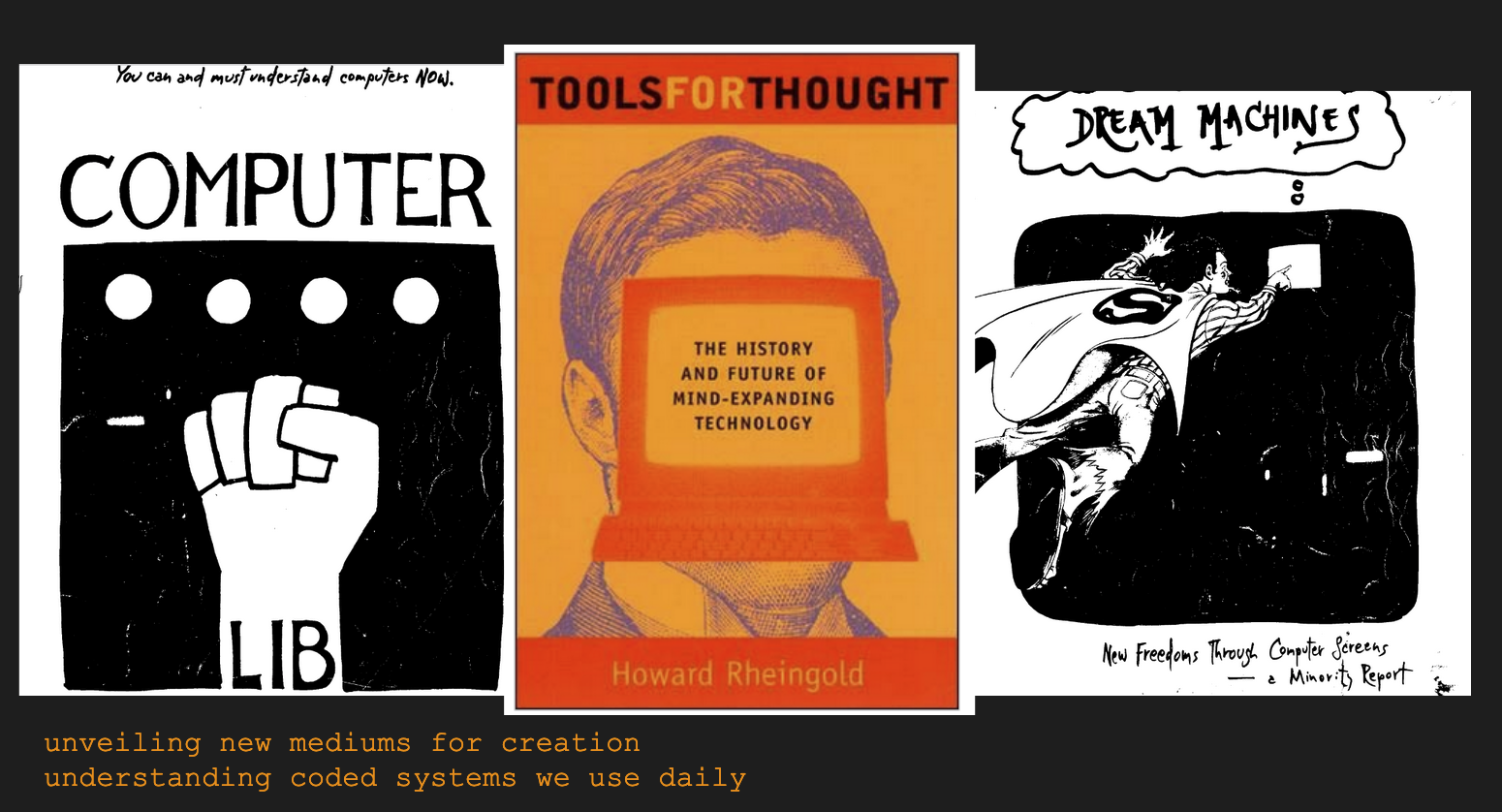 Which was the first slide of the first class, referencing two of great books.

Maybe it is not just about deciding which tools are needed for exploring new mediums, but designing how we use existing tools, and setting own rules.